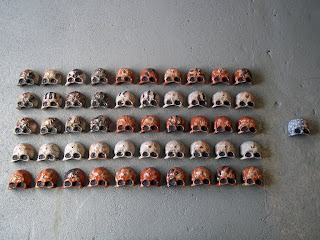 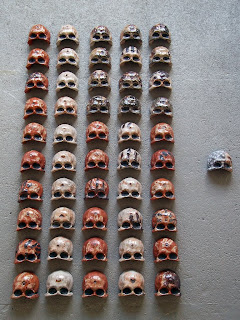 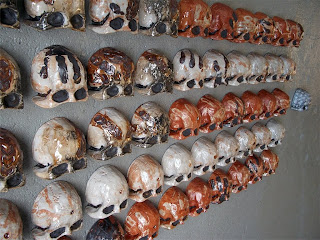 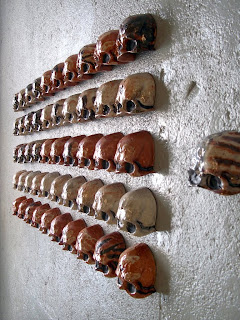 Manifest Destiny is the title of this work that consists of fifty-one wall mounted ceramic skull masks. Fifty masks are juxtaposed by a single mask separated from the grouping. I view the skull as a repository of knowledge, a vessel of sorts. Iconographically skulls are not unique. Historically all human societies have both revered and reviled them. Viewed as symbol they represent the shared mortality of all humanity. We as human beings share the same physiological foundations and origins. Once the flesh is stripped from our bones and the life from our bodies, reduced to our universal elements, we expose the irony of the belief that one group is inherently more favored than another by the divine.
My goal in this work is to create a stark visual icon that imparts both individual humanity and the conceptual foundations of Manifest Destiny. Manifest Destiny was a phrase which invoked the idea of divine sanction for the territorial expansion of the United States. It first appeared in print in 1845, in the July-August issue of the United States Magazine and Democratic Review. The anonymous author, thought to be its editor John L. O'Sullivan, proclaimed "our manifest destiny to overspread the continent allotted by Providence for the free development of our multiplying millions." In essence the concept of Manifest Destiny is the superiority of one group over another justified by divine right.
Each of the masks in this work are high-fired to cone 10 in a reduction atmosphere and glazed using eight different shino recipes I developed through experimentation. I use these shino variations to create individualized tribal patterning on the masks in the primary grouping, reminiscent of Native American body decoration. The grouping is glazed and arranged in such a way as to evoke the tones and patterns of an American flag. The single mask juxtaposed to the grouping is also glazed with various shinos, as well as gosu slip, to create another variation of an American flag. Our national quest for westward expansion, the perpetual frontier, came at a shared cost of blood and treasure to all involved. The concept of Manifest Destiny is one of the foundations of our national legacy and ultimately our nation's responsibility. My intent is not to define duality or to critique it but to challenge on an instinctive level the conceptual cause and effect of predestination.
Posted by Kumagama - 熊窯陶芸 at 6:48 AM