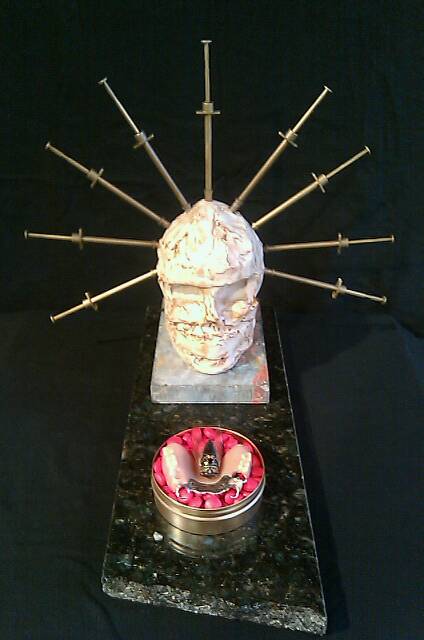 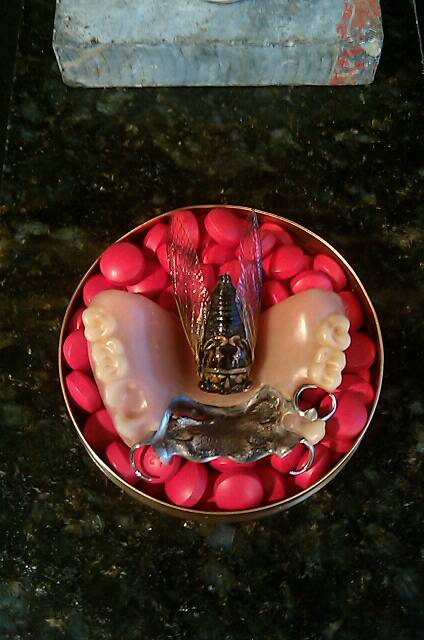 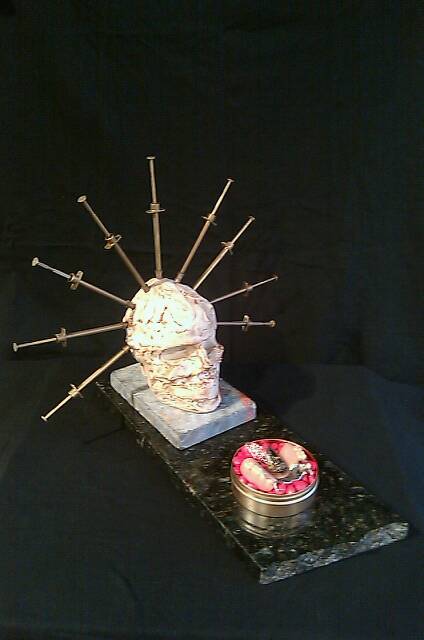 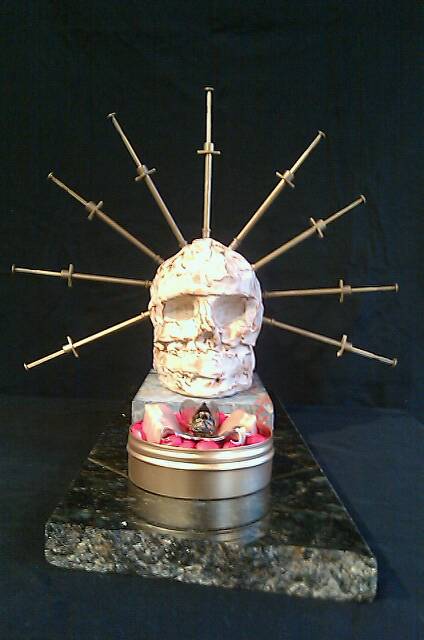 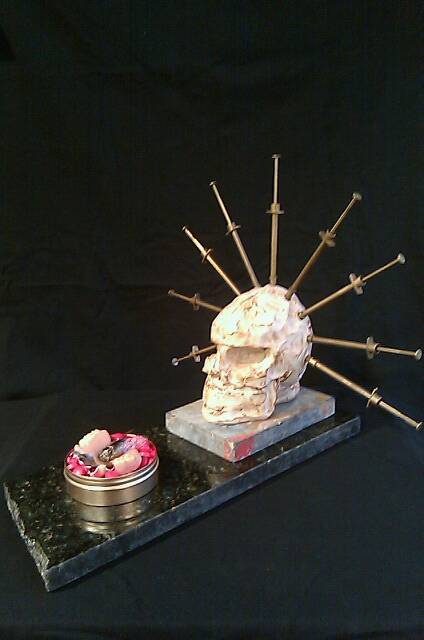 This is the piece I made to apply for the 2011 "Dia de Los Muertos" or All Souls Day show at El Museo in Buffalo, NY. The theme of this years show is: "Honoring of the dead with altars created using objects such as photographs, food, drink and personal effects that were of importance to the deceased". The show runs from October 31st through November 29th. This work deals with my struggles concerning my maternal grandmother's death from cancer. Her passing heavily affected me. Knowing this I have tried several times to create a work that encompasses those emotions. This is my most recent attempt.

Iconographically the work references the Ancient Greek story of Eunomos and the cicada. The cicada in mythology is an ancient polyvalent symbol its resounding themes are resurrection, immortality, spiritual realization, rebirth and immortality. Cicadas are mentioned as being sacred to the ancient Greek sun god Apollo. Homer mentions cicadas in the Iliad and compares the discourse of "sage chiefs exempt from war" to the song of the cicada. In Taoism the cicada is the symbol of the hsien, or soul, disengaging itself from the body at death. Cicadas also feature in Japanese carvings on small medicine boxes and they are mentioned in ancient Hindu law in India.

In this work I combined objects from my grandmother's life, her battle with cancer and my own artistic vision. The base of the piece is black granite and steel on these are arranged personally significant icons. I sculpted a skull then used syringes that my grandmother used to administer chemotherapy to herself and gold leafed them to create a halo. I also gold leafed a pill container, filled it with pain medication, then placed her dentures in it to act as a reliquary for a preserved cicada I found. The dentures for me reference the skin shed as the cicada grows its wings to fly and the red of the pills symbolizes both her pain and her love of cardinals. On the surface the viewer might see this piece as macabre but for me what I'm left with is...a silly childhood memory of seeing my grandmother's dentures floating in a glass of water by the bathroom sink juxtaposed with the horrible realization when I was a man that she had terminal cancer.

The reason I chose the title, Canticum Acheta : latin for, "Cicada's Song" is because of Socrates' Myth of the Cicadas: The Cicadas chirp and watch to see whether their music lulls humans to laziness or whether the humans can resist their sweet song. Cicadas were originally humans who, in ancient times, allowed the first Muses to enchant them into singing and dancing so long that they stopped eating and sleeping and actually died without noticing it. The Muses rewarded them with the gift of never needing food or sleep, but to sing from birth to death. The task of the Cicadas is to watch humans to report who honors the Muses and who does not. As an artist and grandson it is my duty to honor both Muses and maternal grandmothers.
Posted by Kumagama - 熊窯陶芸 at 6:10 PM